From Aliens to Wuhan

We love a good conspiracy

The Covid-19 crisis has been a veritable medical lab producing a range of new theories to occupy our time, confirm our prejudices and justify our political positions. Although we can laugh (hopefully!) at the idea that the coronavirus was started by hand-sanitiser companies or Greta Thunberg in an attempt to deal with climate change, we have also seen in the news a darker trajectory that conspiracies can take – whether it is burning 5G towers or attacking Chinese nationals. So the question I have been pondering is why we gravitate so easily and quickly to conspiracy theories. Now I am sure that the reasons are manifold and that it is at least partly because we love a good story – just think of all the conspiracy shows that are available on Netflix and Amazon. However, I do have three other suggestions for you to consider.

We live in a world where we can quite easily convince ourselves that we are in control and that if we are just sensible and careful we can manage all eventualities. The coronavirus has shattered that illusion on both a macro and a micro level. Nations and scientists scramble to find solutions while the best-laid plans of millions of individuals lie in tatters. In those moments it is far easier to cope with the idea that somebody (or some group) has intentionally sabotaged our controlled environment than to believe that our environment was never actually controlled in the first place. Plagues, viruses and wars have ravaged societies for as long as humanity has been around and will continue to impact us into the future. What we are experiencing is not new, it is just very new to a society that has lived incredibly stable, and increasingly affluent, lives over the last 70 years.

Having someone to blame – or even worse to hate – makes it easier to deal with our grief, misfortune and loss. We find it easier to blame a person than to hate a virus or to accept that sometimes bad and awful things just happen. History is full of examples of how conspiracies have created scapegoats that have enabled a) people to cope and make sense of their suffering and b) others to consolidate their political and ideological positions – consider the rise of anti-semitism in Nazi Germany as a great example.

A good conspiracy enables us to not only justify our suspicion of authority but also our rebellion against it – whether that is through our actions or more subtly in the posture of our hearts. This has the added benefit of reinforcing the validity of my own independent kingdom – after all who can you really trust! I would not suggest for a moment that blind acceptance of authority is a good thing, but is an abject lack of trust a great alternative? We have become comfortable with a default of suspicion. The war cry of “Fake News” has perpetuated this trend and like all poison it may have an element of truth which makes it palatable before it slowly kills.

Now I appreciate that conspiracy theories can find a home across a wide range of society, but as a pastor it sometimes feels like the church is particularly fertile ground. An article in Christianity Today (17 April 2020) stated that a recent survey showed that Christians across all demographics were more likely to believe that Covid-19 was created in a lab than the rest of the American public. To an extent this is not surprising because pretty near the centre of our faith is the belief that there is an unseen realm. If we combine that with the motifs of the “Kingdom of God” and “Spiritual Warfare” then we see that people of faith have a paradigm far more accommodating to believing that there is more going on than meets the eye. So how can we as Christians use such a paradigm in a way that is fruitful and life-giving rather than in a way that promotes fear and suspicion: 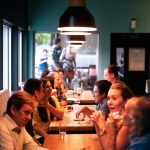 “As you were” or “something different”?All Posts, Community Posts, Culture, Spiritual formation