Fasting tends to do all kinds of things to us. Positively, this ancient spiritual practice can lead to a greater awareness of the nearness of God to us. Negatively, it probes our motivations and exposes the flaky things that we lean on for security and comfort. One of those is subtle (or not so subtle) confidence in our own goodness before God.

“…To some who were confident of their own righteousness, and looked down on everybody else…”

As usual Jesus choses two characters to evoke the biggest response from his listeners. Enter exhibit A – The pharisee. A guardian of all things pure and holy in Israel. Jealous for the sanctity of the worship and faith of the nation. Respected and a perhaps little feared. Exhibit B – The tax collector. A Jew, but hardly. A complete sell-out to Rome, collecting the oppressors tax from his own people and skimming some off the side no doubt. The hero of nobodies stories. Well, almost nobody.

One of this Pharisees leaning posts was his personal discipline to fast twice a week. Public prayers of gratitude used as a thinly veiled device to remind God, and all who could hear him of course, what a good and righteous man he was. This was such a bad idea.

Comparing ourselves to one another doesn’t end well. We can only take two paths. Either we think we are better, and travel down the road of pride. Or we think we are worse, and slide down towards self-pity and condemnation.

There is nothing quite like a fast to stir up latent self-righteousness. “…I thank you God that you have given me strength to fast these days on only water. Thank you that I did not give in like some others did…”. Nobody prays like that do they?Surely not you or me! This is how you know if self-righteousness is lurking: When you gather to pray tonight or tomorrow and you are chatting with someone else at the meeting and they tell you that they got so tired that they had a little coffee in the afternoon. You think quietly to yourself: “I’ve managed not to”. If that happens. If that thought enters you head, you just scored zero. Fail. Nothing gained. Just go eat something nice.

Or, you could catch that thought, take it to Jesus, and thank him for the opportunity that this fast has given you to root out self-righteousness.

Fasting has nothing to do with appearances or performances, or endurance. If fasting becomes all about striving and self-effort, and what we are giving up, we may as well not do it, as it will have no value.

I pray that his grace will be upon us all as we seek him in this season of prayer and fasting.

“…It was not by their sword that they won the land, nor did their arm bring them victory; it was your right hand, your arm, and the light of your face, for you loved them…” (Psalm 44:3) 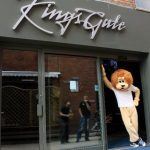